Anushka Sharma’s post for Virat Kohli after he reaches his 72nd century is unmissable and cute!

Anushka Sharma she is a proud wife as a cricketer Virat Kohli hit his 72nd century in international cricket against Bangladesh. Kohli hit a hundred in the third ODI against Bangladesh at Chattogram on Saturday. Following this, Anushka gave a shout out to the former Indian captain on her Instagram story. Sharing a picture from Virat’s big moment, the actress simply wrote ‘100’ along with two heart emojis. 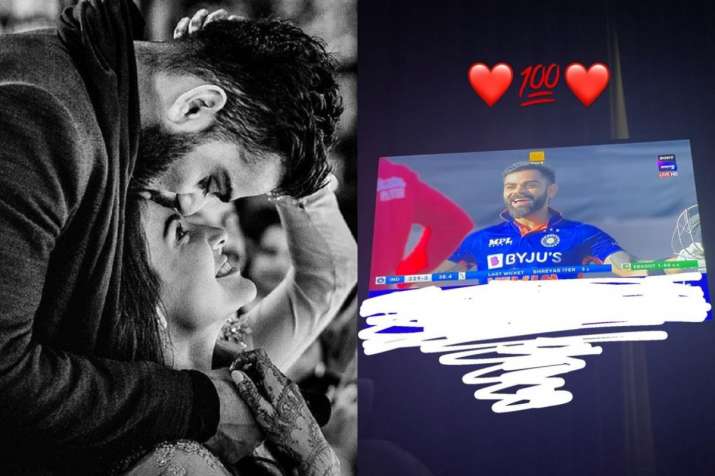 Virat etched his 72nd century in international cricket to surpass Ricky Ponting’s record of 71 international centuries. This was the right-hander’s 44th ODI century, which came after a three-year break in the 50-over format. India posted a mammoth score of 409 runs, powered by Ishan Kishan and Virat Kohli’s brilliant knocks at the Zahur Ahmed Chowdhury Stadium, Chattogram in the final ODI of the three-match series against Bangladesh.

The Indian batting looked set to falter again as it had in the series, but the duo of Virat and Kishan forged a partnership for the ages to terrorize the Bangladeshi bowlers and pillage them for runs all over the park. The batting pair put on a run-fest for the Indian fans, who have been deprived of a scintillating performance throughout the series.

Kishan and Virat piled on the misery for the Bangladeshi bowlers as they piled on runs at will to share a massive 290-run partnership for the second wicket, achieving individual milestones in the process. The duo helped India cross the 400-run mark for the sixth time in ODI cricket.

Anushka Sharma married cricketer Virat Kohli in 2017 in an intimate ceremony in Italy after many years of dating. In January of last year, they welcomed a daughter, Vamika.

On the professional front, Anushka recently surprised everyone with her cameo in ‘Qala’. Her presence in the film was a closely guarded secret and seems to have become quite the talk after its release. Backed by Anushka’s brother, Karnesh Sharma’s Clean Slate Filmz production house, the film stars Tripti Dimri, Svastika Mukherjee and Babil Khan. This is Babil’s official acting debut in films.

Anushka will next be seen in the upcoming film Chakda Xpress. Directed by Prosit Roy, the film is a sports biopic based on the life of former Indian cricketer Jhulan Goswami. Anushka will be seen in the role of a cricketer for the first time in her career. The sports drama will also premiere on Netflix.

Previous Post Who is Amit Lodha, the IPS officer who was suspended for the Netflix series Khakee The Bihar Chapter?
Next Post Amitabh Bachchan's granddaughter Navya Naveli Nanda and actor Siddhant Chaturvedi make their first public appearance together, watch